Disclaimer Under Section 107 of the Copyright Act 1976, allowance is made for “fair use” for purposes such as criticism, comment, news reporting, teaching, scholarship, and research. Fair use is a use permitted by copyright statute that might otherwise be infringing. Non-profit, educational or personal use tips the balance in favor of fair use.

Three guesses who said this:
“Even crossing a national border might one day involve a detailed brain scan to assess an individual’s security risk”.
If you said Kill Gates, you’d be on the right track. Elon Musk, too, subscribes to the ideal that humans should merge with AI to avoid the risk of becoming irrelevant. He is the co-founder of Neuralink, a start-up that reportedly wants to link the human brain with a computer interface.
But it was in Satan Klaus’s 2020 book, “COVID-19: The Great Reset” when the deep state came out of the shadows.
That’s right, our favorite globalist Klaus Schwab, he of the WEF and steering committee member in the Bilderberg meetings, made it clear that transhumanism is an integral part of “The Great Reset” when he said that the fourth industrial revolution would “lead to a fusion of our physical, digital and biological identity”.
In his book he clarifies that this refers to implantable microchips that can read your thoughts.
On the surface, the Great Reset means reduced incomes and carbon use. But Schwab and the WEF also define the Great Reset in terms of the convergence of economic, monetary, technological, medical, genomic, environmental, military, and governance systems. The Great Reset would involve vast transformations in each of these domains, changes which, according to Schwab, will not only alter our world but also lead us to “question what it means to be human.”
Lucy and I agree: Those who aren’t already questioning what it means to be human are in deep trouble… Because governments sure aren’t cheerleaders for being human. Not for a long, long time. If ever. Certainly not during the 1918 Spanish Flu when Rockefeller and his friend, head medical expert, Frederick Gates, experimented with “shedding” vaccines. Also not very human friendly to say that “we’re going to take things away from you for the common good” –– courtesy Hillary Clinton. Definitely not very human to keep a whole island trapped like prisoners –– refusing entry and exit to friends and family of Ozzie inmates.
More about “it’s not a conspiracy when they do it openly” in today’s video! As well as a masked cat, which gave Lucy a lot of satisfaction. 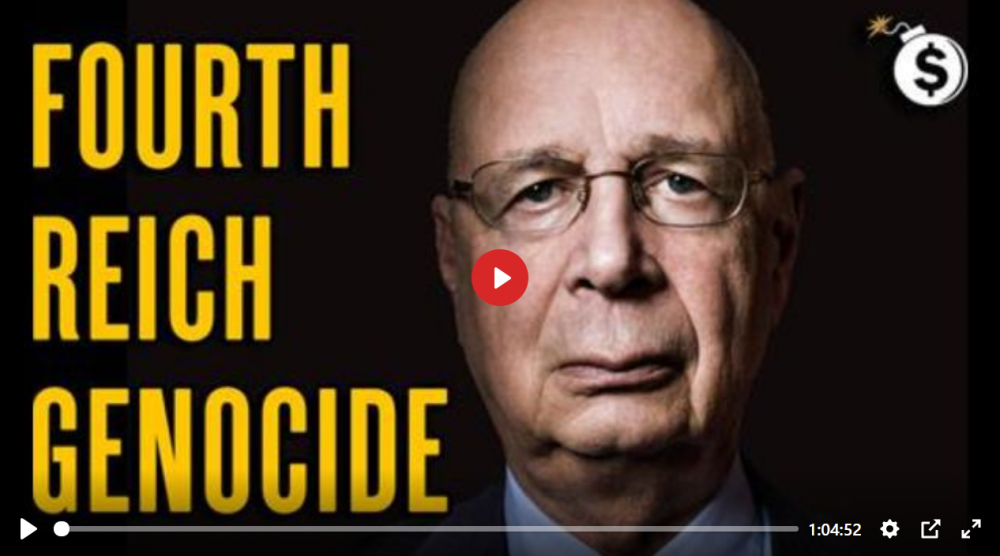 END_OF_DOCUMENT_TOKEN_TO_BE_REPLACED

No Proof COVID-19 Exists (Governments Quietly Admit + PROOF It All Was Planned)
https://www.bitchute.com/video/8nDzizG4uJ4i/

A political strategy to remove civil liberties and stomp out all dissent so the nazi party can assume all power, unquestioningly.

Pitiful and obvious to anyone with a thinking brain. Candance Owens

ENGINEERING A RACE WAR: WILL THIS BE THE AMERICAN POLICE STATE’S REICHSTAG FIRE?

Repost from DollarVigilante.com.
With the USSA celebrating Thanksgiving this week, I thought I’d list all the things I am grateful for…
I am grateful that the coronavirus doesn’t attack human eyes, otherwise the world’s sheeple would all have been forced to go through life with muzzles and blindfolds… (Oh, wait. Scrap that one)
I am grateful that the coronavirus is able to distinguish between funerals (60 people allowed), family gatherings like Thanksgiving and Christmas (6 people allowed), the beach (0 people allowed) and going to a Black Friday sale.
I am grateful that Acapulco somehow managed to escape the covaids and that I was able to celebrate my birthday with a truck-full of unmasked friends and family.
I am grateful that people feel comfortable with ripping off their masks to feed their faces in a restaurant; and amused as shit that the same people would report their neighbors’ Thanksgiving lunch for ten. A for Hypocrisy.
I am grateful that 2020 has a lower death total in the US than in 2018. Now 2018…that was a bad-ass year, thank fck it’s over.
I am grateful for not living in Toronto, Kanada, where the police claim their role is to “force compliance” to a government that uses Orwellian doublespeak to shut down everything under the Reopening Ontario act. And a prime minister that denied The Great Reset as a conspiracy theory now has to eat humble pie in public. Oh well, it won’t be the first time.
I am grateful that the “deadliest virus in history” doesn’t require more safety precautions than a cloth or paper mask and washing your hands when you enter a store.
I am grateful to be in the company of people like Tom Woods (whose video was wiped) and Del Bigtree, whose show The HighWire has been deleted by Facebook after 4 years, 190 episodes and with 360,000 followers. May BitChute and BitTube and LBRY live long and prosper.
I am grateful for each great review my book The Controlled Demolition of the American Empire has received so far. Really guys, thanks!
I am grateful that Gates’ elves have somehow managed to produce a vaccine for a virus that hasn’t even been identified yet. It’s a Christmas miracle.
I am even more grateful that hundreds of thousands of zombie Karens are setting up camp to be first in line for said vaccination – and that they are already being pre-programmed to accept the “inevitable” side effects. Because your government would never harm you. Never!
Catch me and Lucy on today’s show for more fun facts about The Fourth Reich Industrial Revolution, Great Reset & Worldwide Tyranny. It’s a good one. 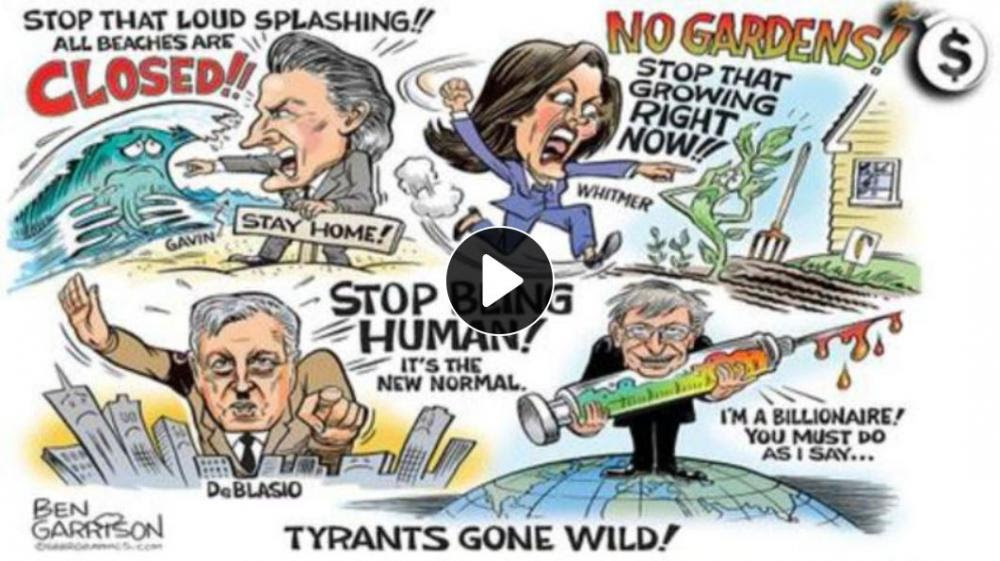 Watch on: LBRY | Bitchute | Dtube | 153 News | Facebook
But seriously, I am grateful for having a healthy body, a rational mind and a fighting spirit.
I am grateful for having an amazing family, friends and team. And I’m grateful for every member of The Dollar Vigilante and The Crypto Vigilante who has supported me over the years. You can catch me on Twitter @BerwickJeff where I will be tweeting in the illustrious company of “people” like Satan Klaus (Schwab).
Buy the book. Join us at The Dollar Vigilante. Come to Anarchapulco.
I promise you’ll be grateful you did.

THE NAZIS ARE BACK! – The arrest of Dr. Andreas Noack occurred after the passage of the ‘Infection Protection Law’ which was protested widely by vast sections of the German population. The arrested doctor was supposedly providing medical assistance to anti-lockdown protesters.

According to reports, “The reasons for the police raid and arrest … have not yet been officially revealed. However, there are rumors [unconfirmed reports] that Dr. Andreas Noack provided medical assistance to hundreds of protestors during lockdown protests against the German government.” Reportedly, Dr. Andreas Noack was under investigation for “being non-compliant with the COVID-19 lockdown laws enacted by the German government.”

The ‘Infection Protection Law’ has been compared by some to the Nazi era Enabling Act. Like the law that was passed in 1933, the recently passed law also confers certain legislative powers to the government, which hitherto rested only with the Legislature, that is, the Parliament. The Infection Protection Law provides the government with a legal basis to restrict the fundamental rights guaranteed by the German Constitution.

Stop this evil now. Or one day they will come for you and your children. They already have, actually. These NAZIS are the ones who have taken your living, locked you in your home, terrorized your children and now plan to force you to consume their corrupt, toxic products at gunpoint. Those who died in the 1940’s fought to ensure this never happened again. Fight like they did. Fight for your life. Fight to live freely.

“Towards A Police State in Germany? Live Video of Police Raid into Home of Dr. Andreas Noak” GlobalResearch
https://www.globalresearch.ca/towards-police-state-in-germany-police-raid-into-home-of-dr-andreas-noak/5729950

OVER 17,000 HEALTH EXPERTS SIGN HISTORIC COVID DECLARATION
Three of the world’s leading infectious disease specialists from Stanford, Harvard & Oxford created “The Great Barrington Declaration,” calling for an immediate withdrawal of strict lockdown measures for healthy populations, and “Focused Protection” for our most vulnerable. As we post this segment, almost 18,000 medical practitioners and public health experts have signed the declaration in support.

Fair Use: In some instances, we include someone else’s footage that is covered in Fair Use for Documentary and Educational purposes with the intention of driving commentary and allowing freedom of speech.

The controversial corona measures of the black-green government must not be criticized. Those who dare risk their professional existence and possibly their freedom. The critical physician Peer Eifler was banned from practicing his profession by the Styrian Medical Association because he issues patients’ certificates that certify that the mask requirement is damaging to their health.

As if that weren’t enough, Eifler received an uninvited visit from the police yesterday, who carried out a house search at the behest of the Leoben public prosecutor’s office.

FPÖ-TV only interviewed Peer Eifler a few days ago. As you can see here, he doesn’t mince his criticism of the government. But how else can you describe a regime that reacts to criticism with a professional ban and house searches?

Why billionaires are interested in a one-world government? It is for total control – the operators need them. It is a symbiosis of sick creatures.

Fair Use: In some instances, we include someone else’s footage that is covered in Fair Use for Documentary and Educational purposes with the intention of driving commentary and allowing freedom of speech.