Tiffany was a registered nurse who was one of the first nurses/medical personnel who got vaccinated on live tv when the vaccines were first rolled out.

She was fine at first and even clapped her hands joyously after the injection. Didn’t seem to be tense, looked relaxed and calm.
She then went on the microphone to talk about her experience and shared positive thoughts. But she couldn’t finish her speech. She became visibly lightheaded and mentioned she was, before collapsing into the arms of a colleague/doctor standing next to her.
That was the last time we have seen her until some time later, which we will get to in a bit.

A doctor continued the press conference and stated that Tiffany had a fear of needles most likely which triggered her to get lightheaded and faint.

This has to be the worst excuse and a blatant lie, because Tiffany chose a career in which she is constantly giving injections and most likely getting them too- as most hospitals require their medical staff to get flu shots, hepatitis A and C shots etc. Can anyone imagine a nurse who is afraid of needles? Definitely the wrong profession to pick if one has this issue.

Then after public pressure the hospital released a video in which a woman that vaguely resembled Tiffany was shown in a group picture/video. She was wearing a medical mask. People that had studied her social media in great detail claimed it wasn’t her. She looked different and she never parted her hair in the middle, they said. There was no way of knowing when the video was shot. It could be an old video or they used a body double. 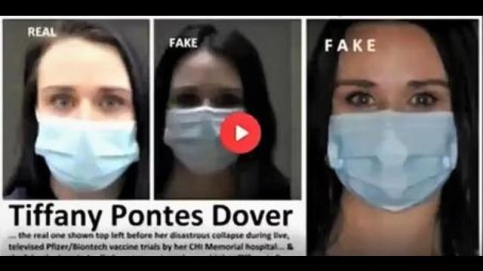 Tiffany used to be very active in her social media. Facebook, Instagram especially. That stopped after that unfortunate day. She went quiet. Her family went quiet. She was a young mother and wife with two young daughters.

She has been gone. Many believe her family is under a gag order and won’t speak about her. Maybe paid off by Big Pharma.
Where ever she is, we hope she is in peace.

Let’s make sure her story and disappearance is never forgotten. We still need to know what happened to Tiffany.

One thought on “What happened to Tiffany Pontes Dover”